The mysterious story of a mysterious stranger, who started to visit a village only at night, and the events he caused in 1980…

The Stranger Who Visits at Night

Paranormal Activity – In 1980, when it was forbidden to go out, we used to gather in coffee houses and chat under the oil lamp. [1]Military coup period in Turkey. Martial law conditions were applied before and after it, which was declared due to the current political tension and domestic turbulence.

Our village was very small in those times. There were about 15-20 households in total. We were sitting in the coffee house one day… After the night prayer [2]Muslims pray 5 times a day at certain times. This is called prayer. This part of the text refers to the last prayer of the day, which is around the night. someone entered the village’s coffee house. He was a man at medium height, whose beard was at his chest level and wearing a fez… He greeted us, then sat at our table.

His Eyes Were Different from Regular People

3-4 weeks passed. This person started to lie to people by saying, “Do not go to the mosque, the hodja is committing adultery in the city.”

One day, I was listening to what he said from the next table in the coffee house but not saying anything… He said, “It is a sin to pray behind this man. [3]The collective worship of Muslims is led by a religious official called the imam. Imams are people who are famous for and sensitive about good morals in line with religious rules in their … Continue reading Do not go to the mosque!” The naive people of our village believed this! They started to not go to the mosque.

I was the only one who was praying behind the hodja. After the prayer, I talked with the hodja… He said, “Why didn’t I see this man? Bring this man to my house.”

The Effect of Ayetel Kursi

That man was there. He was telling lies about the hodja, which he couldn’t stand anymore. He intervened. After all, he was talking about his honor. Everyone was looking at the hodja as if they want to lynch him.

The hodja started to read Ayet-el Kursi out loud… At that moment, the voice of the man changed. He was yelling, “Devil‘s offspring!” Then he ran away from the door. We all went out, but the man was not there.

Everyone went in again. The hodja said harshly, “You careless people! How could you believe something like this? a demon disguised as a human tricked all of you and you broke away from religion and faith!”

The people, who understood their mistake, began to visit the mosque starting from that day. We didn’t see that man (or demon) ever again… 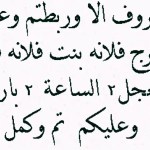